This exclusive 2-day event will revolve around the brave men who fought for our country’s freedom. Visitors will have the rare opportunity to join Vietnam Veterans, as they conduct a variety of panel discussions, in a unique backdrop at the Tennessee Museum of Aviation. Meet the men who flew the A-1 Skyraider, along with their special guests, as they reveal more about an extraordinary “over the fence” mission known as Operation Tailwind.

The Tennessee Museum of Aviation is honored to host this very special 2-day reunion. Please join us on April 27 & 28, 2018, as we welcome back the men from Operating Location Alpha Alpha (OLAA).

The 6th Air Commando Squadron (ACS) was formed at England AFB as a unit of the 1st Air Commando Wing. The unit was deployed to southeast Asia in February 1968 and arrived at Pleiku Air Base, SVN March 1968. During the stay at Pleiku AB, the squadron maintained a forward SAR alert unit at DaNang Air Base.

The 6th SOS was manned with around 25 pilots and 135 airmen. Their A-1 inventory numbered approximately 20 aircraft. They used the call sign SPAD and tail code ET. Wallace A. Ford was the first commander of the 6th SOS. He was lost May 24, 1968 while on a mission over SVN and listed KIA. There were eight (8), including Ford, KlA’s and four (4) MlA’s who were later changed to deceased.

In October 1969 the unit was being broken up and the pilots were transferred to NKP. They were assigned to either the 1st SOS, 22nd SOS, or the 602nd SOS (Fighter). There was a small group that manned a detachment at Pleiku but were there for only a short period of time. During this time period the 56th Special Operations Wing (SOW) Operating Location Alpha Alpha (OLAA) was established at DaNang, commanded by Jim Wold. Jim had been at Pleiku with the 6th SOS. The personnel manning the OLAA were assigned to the 56th SOW and on TDY at DaNang. Even while all the kinks were being ironed out missions were flown daily. In the end the 6th ACS/SOS was finally deactivated on November 15, 1969. Still the 56th OLAA carried on as SPAD.

This material comes from skyraider.org
and A-1 Skyraider Association Newsletter, Vol 5. No. 1, March 1987

• The four surviving combat A-1 Skyraiders

Roger Youngblood will lead a discussion about the four surviving combat A-1 Skyraiders return to the United States.

Escape to U Taphao: In the final days of the Vietnam war, chaos and heroism converged in the effort to evacuate U.S.-supplied aircraft.
Originally published in Air & Space/Smithsonian, December/January 1997
Read more at https://www.airspacemag.com/military-aviation/escape-to-u-taphao-112/#gOrWvA3tDTLbgQ55.99

Loading only the most valuable aircraft aboard the Midway meant, of course, that older combat aircraft, like the A-1 Skyraiders, would be left behind. These propeller-driven aircraft had proven effective in close-air-support and rescue operations, and Aderholt was not about to let them fall into Vietnamese hands. With the blessing of the Thai military, Aderholt ordered Youngblood and Major Jack W. Drummond, both pilots who had flown Skyraiders years earlier, to U Taphao to fly the A-1s to a “less conspicuous location.”

They delivered the airplanes to Ta Khli Air Base in central Thailand and parked them out of sight in a hangar. (Aderholt was familiar with the base because he had worked with the CIA there to send U-2s on missions over China.) The two pilots returned to U Taphao and brought another pair of A-ls to Ta Khli. When the U.S. Embassy in Thailand found out about the F-5s that were given to the Thai air force and the movement of A-1s, Drummond and Youngblood were returned to their regular duties, and the remaining A-1s stayed at U Taphao.

Aderholt retired from the Air Force in 1976, but he stayed in Thailand for four more years—long enough to arrange transport home for the four A-1s he had sent to Ta Khli. He says today that he knew those aircraft had become rare in the United States and he wanted to make sure a few were preserved.

Aderholt rented tractors to pull the airplanes from Ta Khli to the Chao Prya River. He had them loaded on four barges brought up from Bangkok, which immediately got mired in shallows. Aderholt bribed the keeper of the Chainat Dam with 20,000 baht ($1,000 at the time) to open the flood gates. The barges floated down river to the port, and the aircraft were loaded on a ship. Later, warbird collector Dave Tallichet brought them to Los Angeles and stored them at Orange County Airport until 1986. Tallichet still flies one of the Skyraiders out of Chino Field in California. Another is on display at the Santa Monica Museum of Flight in California.

The Museum will open to the general public at 10am. Soon after opening, and weather permitting, our Douglas A-1H Skyraider will perform a brief flight demonstration to begin the day. Don’t miss this opportunity to meet the “Heroes” who bravely served during the Vietnam War. Join us in the Exhibit Gallery, where we will begin a discussion on the 6th Special Operations Squadron and the four surviving combat A-1 Skyraiders.

Rain or shine these men, who fought in Vietnam, will be on hand to share their experiences. This 2-day OLAA Reunion is essential for history enthusiasts.

**The OLAA reunion group will hold a private after-hours dinner. The museum will close at 5pm on April 27, 2018** 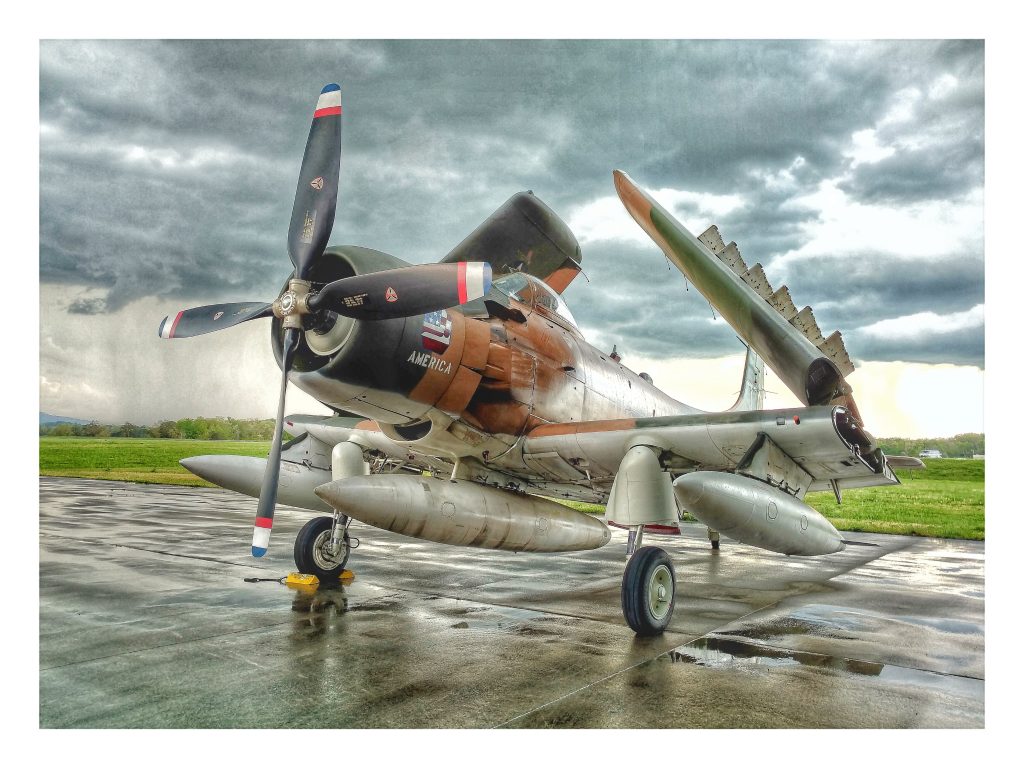