This exclusive 2-day event will revolve around the brave men who fought for our country’s freedom. Visitors will have the rare opportunity to join Vietnam Veterans, as they conduct a variety of panel discussions, in a unique backdrop at the Tennessee Museum of Aviation. Meet the men who flew the A-1 Skyraider, along with their special guests, as they reveal more about an extraordinary “over the fence” mission known as Operation Tailwind.

The Tennessee Museum of Aviation is honored to host a very special 2-day reunion. Please join us on April 27 & 28, 2018, as we welcome back the men from Operating Location Alpha Alpha (OLAA).

Tilt Meyer will lead a discussion covering “Operation Tailwind.” In 1970, a Special Forces SOG team embarked on their deepest ever “over the fence” mission 40+ miles into Laos from the Vietnam border. This team of 16 Americans and 120 Montagnard mercenaries acted as a diversionary force for a large CIA operation some 40 miles further into Laos. The team was surrounded by enemy forces, encountering 72 plus hours of constant combat. Every American was wounded at least once. More than fifty percent of the force were casualties, with 3 Montagnards KIA. They escaped with the largest and most valuable collection of enemy intelligence documents ever recovered in the Vietnam War. This extremely successful Multi-Service mission was called Operation Tailwind.

In 2016, the Tennessee Museum of Aviation hosted the OLAA Reunion. This video link, produced by RBA Marketing & Media, will give you the opportunity to revisit the reunion.

SOG CHRONICLES Volume One
From 1964 to 1972, far beyond the battlefields of Vietnam and the glare of media distortions, American Green Berets and their indigenous troops fought a deadly secret war in Laos, Cambodia and North Vietnam under the aegis of the top secret Military Assistance Command Vietnam — Studies and Observations Group, or simply SOG. The inaugural edition of SOG Chronicles Volume One will be the first in a series of books focusing on the many untold stories from that eight-year secret war where Green Berets went deep behind enemy lines without conventional support from artillery, tanks, or ground support troops where communist forces massed 50,000-100,000 troops to combat them while keeping the Ho Chi Minh Trail supply lines open. The centerpiece of SOG Chronicles Volume One is the 1970 story of Operation Tailwind, features a SOG element of 16 Green Berets and 120 indigenous soldiers that went deeper into Laos than any operation during the secret war. Every Green Beret received at least one Purple Heart, including the sole medic, Gary Mike Rose. He is slated to receive the Medal of Honor from President Donald J. Trump in October 2017 for his valor and medical skills tending to more than 60 wounded troops during that four-day mission. “John Meyer’s story about Operation Tailwind does justice to the valor and heroism of the men involved in the four-day battle. Meyer writes about this historic SOG mission with clarity and attention to detail that is long overdue in regards to this top secret mission. SOG Chronicles Volume One is mandatory reading for anyone remotely interested in SOG history or simply in how the Green Berets operate deep behind enemy lines.” —Billy Waugh, SOG/CIA operative

Purple Hearts were awarded to every Green Beret, and just a few months ago, Gary Mike Rose received the Medal of Honor, from President Donald J. Trump, for his heroics and medical ability to assist more than 60 wounded troop during the four days of “Operation Tailwind.” 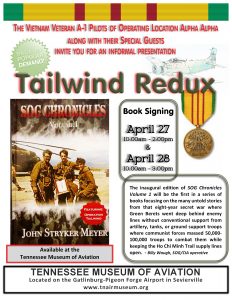 • The Battle for Lang Vei

The Museum will open to the general public at 10am. Soon after opening, and weather permitting, our Douglas A-1H Skyraider will perform a brief flight demonstration to begin the day. Don’t miss this opportunity to meet the “Heroes” who bravely served during the Vietnam War. Join us in the Exhibit Gallery, where we will begin a discussion on “Operation Tailwind” and “The Battle for Lang Vei.”

Rain or shine these men, who fought in Vietnam, will be on hand to share their experiences. This 2-day OLAA Reunion is essential for history enthusiasts.

**The OLAA reunion group will hold a private after-hours dinner. The museum will close at 5pm on April 28, 2018**